Instead of molding the pool in one piece, as is the norm when manufacturing glass fiber pools and spas, this one would be manufactured in nine sections. This way they would be able to transport it in a container from Johannesburg,  South Africa via Durban to Pemba in Moçambique. Once in Pemba, the pool would be loaded onto a barge and transported to the island. Simple.

Of course installing a glass fiber pool in nine sections is a little different to installing a single shell. But in the past 10 years, this kind of job has become something of a speciality for the company headed by Barry Vorster, and they have perfected an ingenious method of assembly on site.

Once the pool arrived on Matemo Island, it took just three weeks to complete. And the only machinery used on to install the pool were mechanical compactors.

When pictures of the pool – along with step-by-step photographs showing construction – were shown at the South African Pool of the Year awards dinner in Cape Town, they drew gasps of admiration from fellow members of the NSPI.

The pool won a silver award in the category requiring unusual structural or engineering skills.

“The pool is positioned about 33ft (10m) from the ocean and 12ft (3.5m) above sea level, depending on the tide,” said Barry. “Poly Phoenix Glass fiber Products installed the pool using five skilled staff members and about 20 laborers from Moçambique.

“A basic wooden pole structure was erected so we could bolt the glass fiber panels together from the under-side. Then all the joints were glass fibered, a fiber-mosaic was applied and the pool shell was coated with more glass fiber. Once the glass fiber had cured, final leveling and backfilling was completed using 400 pockets of cement mixed with beach sand.

“A damp mixture of stabilized sea sand and cement was compacted in 6 inch (150 mm) layers to form a support structure in front of the pool, at the sea end. Coral rock from the island was then packed by hand in front of the backfilled retaining wall to simulate the natural coral cliffs found on the island.”

This was the 12th ‘jigsaw puzzle’ pool Poly Phoenix had installed in remote locations. The first was 10 years ago.

“The idea originated when we had an enquiry from Greece in 1996,” Barry explained. “They wanted three to four fairly large pools to be installed at small hotels in northern Greece and on the Greek islands.

“There were three main reasons for wanting pre-molded glass fiber: the large number of earthquakes and tremors experienced in the area; the time frame allowed (a concrete-type pool would take too long); and the fact that materials and equipment were not available at the remote locations.

“Our first challenge was transportation of the pools to their final destination. The pools they wanted ranged from 40ft x 20ft (12m x 6m) to 53ft x 26ft (16m x 8m) and would have been impossible to transport as one-piece molded shells. This led to the idea of manufacturing the pools in small enough sections for us to be able to pack them inside a standard container.

“The next challenge was how we would be able to assemble and install the pools in such remote locations where no cranes or special equipment would be available to assist us. We had to devise a plan which would enable us to assemble the pools so they could then be accurately lowered onto a specially prepared sand bed, with channels in the sand to take the flanges of the pool sections. This had to be done so that the base of the pool could then be fitted flush with the sand bed and the pool would be level once it was lowered into position.

“We realized that any structure we were going to use for assembly would need to be put together quickly and easily. It would also have to be removed with minimal time and cost. We opted for gum poles which could be easily loaded and transported in the container and also re-used at the different sites to keep costs down.

“The system worked well and all the Greek pools were completely installed and operating fully within three weeks from our arrival on site.

“A few years later, Orient Express Hotel group had similar requirements at a remote location in the Okavango Swamps in northern Botswana.

“We installed three 45ft x 23ft (14m x 7m) sectional pools at their Eagle Island, Kwai River Lodge and Savute Elephant Camps in the Okavango Delta. These were transported in sections 700 miles (1300 km) by road to Maun, the last town on the edge of the delta. There they were off-loaded and the sections transported individually through the swamps in 6 x 4 vehicles. Since the camps are between 62 and 125 miles (100 and 200 km) from Maun, the journey sometimes took as long as three days. Once again each pool took three weeks to install.”

If the Pool Above Looks Like Hard Work, Don’t Worry This Pool Kit Below Is Highly Rated And Is Easy To Install: 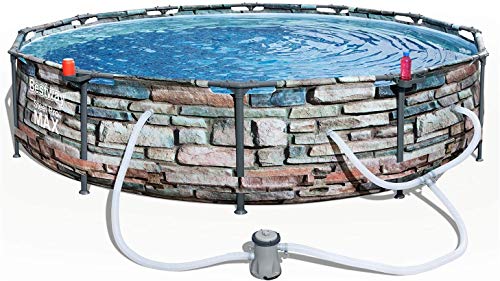