Special Water Features That Will Give Your Pool the Edge

Apart from the water in the pool itself, water may be used in and around your swimming pool to create a variety of effects and water features. These range from fountains and waterfalls to various overflows and spillways, some of which create a rimflow effect.

Main picture above: A huge rockery constructed along one side of a large gunite swimming pool adds interest to otherwise clean lines of the design. Water has been allowed to cascade down one section of the feature, creating a small waterfall.

The possibilities are endless, ranging from ordinary precast fountains placed within the pool to elaborate, custom-made fountains designed to create a constant flow of water into the pool. Some are erected at one end of the pool (often against a wall) while others are placed within the water, adding a third dimension.

In recent years, spillway fountains have become particularly popular. These literally “spill” water into the pool, sometimes creating the effect of a sheet of water.

Fountains may be formal or informal in style, depending on the style of your pool and garden. Unlike freestanding fountains found elsewhere in the garden (which are commonly operated by a submersible pump), swimming pool fountains are usually run off the pool’s pump by simply connecting the fountain pipework to the return pipe. Like any other fountain, they recirculate the water in the pool.

Combined with rockeries, waterfalls are constructed in much the same way as fountains. The difference is that instead of spurting water into the air or away from a wall, waterfalls cascade over rocky ledges and rockeries, eventually spilling into and combining with the pool water.

You do not have to have rock formations in the garden to be able to create rockeries and waterfalls successfully. You don’t even have to have real rocks! Rocks may be introduced from elsewhere and rockeries, waterfalls and other rock features may be created with fake materials with great success.

Construction of rockeries and waterfalls is usually part of the pool construction process. If you intend adding a rockery once the pool builder has completed his work, you will need to ensure that he leaves sufficient space for the feature and does not extend the coping where the rockery will be built. If a waterfall is to be relatively high you may need a stronger pump and an additional stop cock.

Also referred to as rim overflows and flush decks, rimflows have become commonplace in the past ten years. A grid around the perimeter of the pool usually reveals the presence of a rimflow which allows water to flow over the side of the pool into a channel and then to a holding tank. From here it is pumped back into the swimming pool, thus ensuring that the water stays at a constant level.

Frequently called rimflows (probably because the water flows over the rim of the pool) and sometimes referred to rather confusingly as flush decks in Gauteng, spillways literally ‘spill’ water over the side of the pool into a collection channel or trough. Like the rimflow, a spillway also allows water to enter a holding tank, from where it is returned to the main body of water in the swimming pool.

How About This For a Neat Fun Fountain For Your Pool 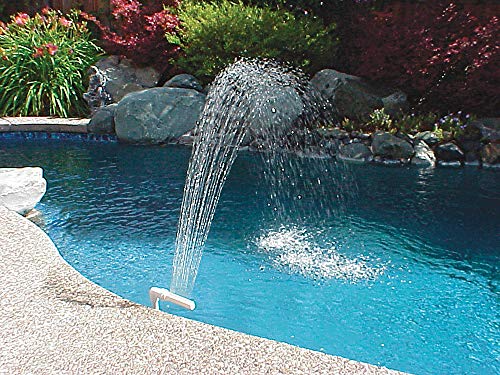 Lighting Up Your Life

Choose a Pool Surround with Style